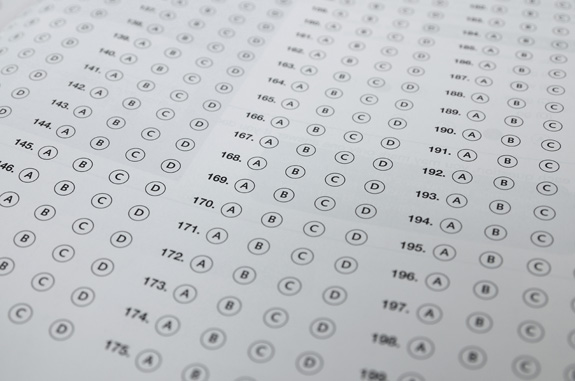 Florida officials are rethinking stringent requirements that make it difficult for students with even the most severe disabilities to be excused from standardized tests. (Shutterstock)

TALLAHASSEE, Fla. — While her 11-year-old son Ethan lay dying last month, Andrea Rediske had to convince the boy’s school district he could not take the state tests.

Ethan’s teacher made daily visits to assess his progress — even when he was in hospice care.

“Seriously?” Rediske wrote in a Feb. 4 email to Orange County School Board member Rich Roach. “Why is Ethan Rediske not meeting his sixth-grade hospital-homebound curriculum requirements? BECAUSE HE IS IN A MORPHINE COMA. We expect him to go any day.”

As state education officials work to overhaul the education accountability system, the plight of students with severe disabilities like Ethan and their teachers is gathering increasing attention in the halls of the Florida Capitol.

Separately, a Pasco County teacher raised concerns about testing students with special needs in a letter to Superintendent Kurt Browning. Her words carried to the highest level of state government, capturing the attention of Republican House Speaker Will Weatherford.

“We need to do something about this for sure,” Weatherford wrote in an email to Browning last week.

Earlier this month, Rep. Karen Castor Dentel, D-Maitland, filed a bill that would make it easier for students with disabilities to receive testing waivers.

Weatherford said he is willing to consider it.

“Ethan Rediske’s heart wrenching story highlighted that our requirements for assessments can be uncompromising in the most extreme cases,” he said in a statement provided to the Herald/Times. “I appreciate the proposals presented to address the problem and I look forward to seeing them get a fair hearing this session.”

Weatherford might also be open to tweaking the teacher evaluation formula to provide some leeway to special-education teachers, he said in the letter to Browning.

All students in Florida public schools are required to participate in the state assessment program.

The education department is in the process of selecting new tests. For now, most children take the Florida Comprehensive Assessment Tests (FCAT) and the state end-of-course exams. Students with special needs can take an alternate assessment, and those with extreme disabilities can apply for an exemption from testing. But the request must be approved by the superintendent and the state education commissioner.

About 1.7 million Florida students take the annual statewide assessment. The education department received a total of 30 requests for exemptions from this year’s assessments, a department spokesman said. Sixteen have been approved.

Ethan Rediske was granted a waiver only after his mother reached out to the media, his mother said.

The video released by the Florida Education Association last week featured four students with special needs from Polk County who had to take the state tests.

Among them: 11-year-old Luis Medina, who is blind and in a persistent vegetative state.

In the video, a teacher shows Luis a series of drawings and asks him to answer questions. The boy, who has suffered brain damage, cannot understand or communicate.

“Right now, how they are testing my child is not the right way,” said his mother, Maria Rivera. “He cannot tell you what he thinks or what he sees.”

State Education Commissioner Pam Stewart defended the use of assessments for all students.

“We all know that the only way to guarantee success in any endeavor is to set goals and measure our progress,” Stewart said. “In education, measuring progress is key to successful learning, and I firmly believe that every child enrolled in a public school in Florida deserves the opportunity to have access to the best education possible. It would be a moral outrage to deny that opportunity to any child for any reason.”

But teachers and school administrators have concerns about the practice.

Gisela Feild, who oversees testing and research for the Miami-Dade school district, worries about the stress on students.

“You have kids with special needs who have to sit for a test and are held accountable to the same standards as other children,” she said. “The burden and the pressure and these kids is astronomical.”

Sabrina Berger, a Pasco County teacher who has taught students with profound disabilities for 18 years, spent last Wednesday testing a child who had to be given a cookie after each answer to help keep him focused.

“They’re telling us to do things against what we’ve always done, what I know is right,” she said.

Berger is also concerned about the effect her performance evaluation, which will be based partly on her students’ test scores and could factor into her paycheck. She aired those concerns in a letter to Browning.

State education officials say the new “value-added” model for calculating teacher performance accounts for external factors, including whether a student has special needs. But like many other teachers, Berger questioned that premise.

“How can their brain damage and multiple challenges be ignored as barriers to achievement?” she wrote. “My students do make achievements, but not on things being evaluated by tests.”

Trump Administration Pushing Program That Moves People Out Of Institutions

Medicaid officials are looking to "jump-start efforts" to move people with disabilities from institutions to community-based settings and they're offering up millions of dollars to do so.

Children To Be Removed From Devereux After Lax Supervision Found

Dozens of children will be pulled from residential centers facing numerous sexual assault allegations after a six-week safety review found that staffers repeatedly failed to watch over them.

Thirty years after the signing of the ADA and 25 years after Congress decided to apply those standards to itself, challenges remain for people navigating Capitol Hill in person and online.

View this article online at https://www.disabilityscoop.com/2014/03/03/concerns-testing-disabilities/19157/